This sundial was a generous gift of the Brizee family. It was designed by Pete Swanstrom for the Herrett Center's exact latitude and longitude.

I am a Chemical Engineer/Consultant, currently living in Boise, Idaho, specializing in chemical and water treatment system design. I previously worked as a Facilities Engineer and Manager for Micron Technology, Inc., a semiconductor manufacturer located in Boise. Prior to that I spent 4 years in the US Navy in San Diego as a Frogman and a SEAL. Some of my interests include Astronomy, Brewing Beer (or at least drinking it,) Explosives, Radio Control Modeling, SCUBA Diving, Navy SEALs, Shooting, Steven Wright Sayings, Skiing and Snowboarding and Sundials.

In 2006 I created this sundial for the Herrett Center for Arts and Science a museum, observatory and planetarium at the College of Southern Idaho in Twin Falls. Since then, two more have sold to private estates in Wyoming and Wisconsin. With their futuristic swept-elliptical body style and an analemmic gnomon designed to achieve maximum date and time accuracy in 2050AD, I call these "New Millennium" sundials.

How it works: Earth’s tilted axis and slightly oblong orbit cause the length of the solar day (the time it takes for the Sun to appear to circle us daily due to Earth rotation) to vary through the year. If you noted the Sun’s noontime position for an entire year, it would trace a skinny figure-eight shape in the sky, known as the analemma. Its vertical size is due to the Earth’s tilted axis, which makes the Sun appear to move north (summer) and south (winter). Its width is mostly due to Earth speeding up (winter) and slowing down (summer) in its orbit, but the axial tilt also contributes somewhat to the width. The analemmic gnomon, tilted parallel to Earth’s rotational axis, casts a shadow on the dial (which is parallel to Earth’s equator), thus correcting for the Sun’s seasonal variation and allowing the sundial to read accurate Mountain Standard (or Daylight) Time. http://swanstrom.net/petes/ 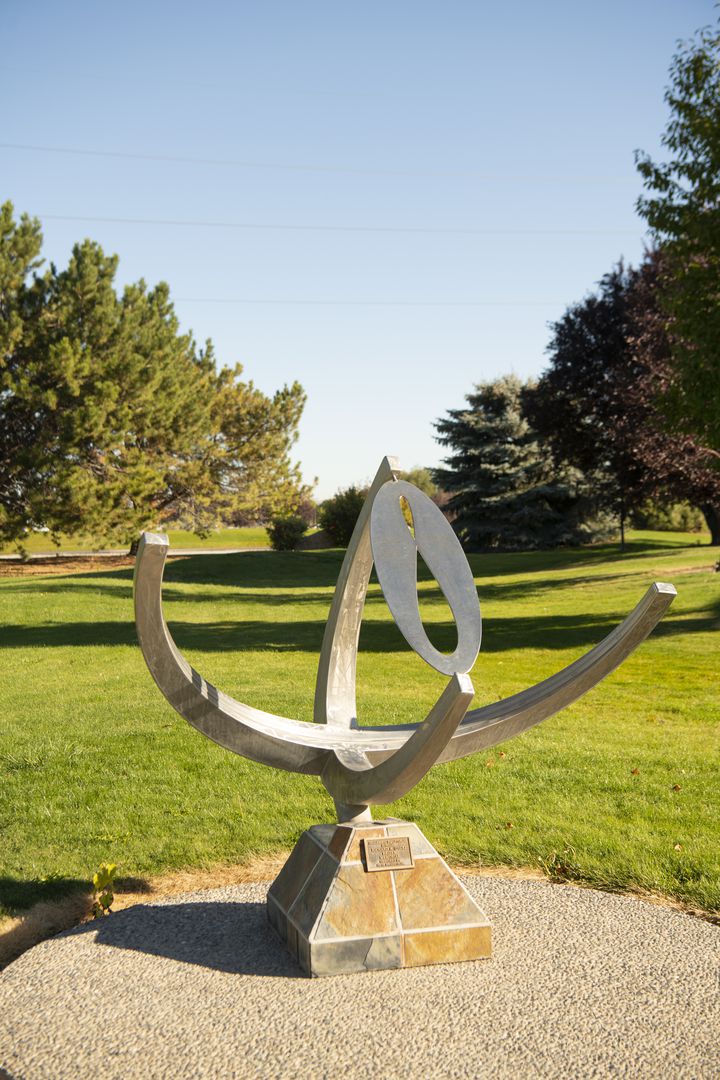 This library is a member of the LYNX! consortium

The LYNX! consortium is a partnership between twelve city and district libraries in southern Idaho to share an online catalog, services, and variety of materials members may borrow, reducing costs and barriers to access for all.